Declaration of Peace and Cessation of War

HWPL is putting forth their utmost efforts to create an international legally binding instrument for peace. With the Declaration of Peace and Cessation of War (DPCW), which was proclaimed on 14 March 2016, as the foundation of these efforts, HWPL has traveled around the world 31 times to meet with political leaders, civil society representatives and the press to spread the importance of the DPCW. HWPL is currently working to submit the document as a draft resolution to the UN General Assembly with the support of many nations. This special edition will give a general overview of the Declaration of Peace and Cessation of War and its 10 articles and 38 clauses.

What is the Declaration of Peace and Cessation of War (DPCW)?
The Declaration of Peace and Cessation of War (DPCW) is an international document written in the format of a declaration. HWPL Chairman Man Hee Lee stated “the current international law needs to be amended so it prevents all wars and conflicts”, and has expressed the need for a new legally binding instrument that will completely cease all wars since the current international law fails to prevent wars and conflicts from occurring. For this, the DPCW, consisting of 10 articles. and 38 clauses, was drafted by the HWPL International Law Peace Committee, which is comprised of renowned legal experts from around the globe, and it was then proclaimed in Seoul, South Korea at 3:14PM on 14 March 2016.

The DPCW is aimed towards developing the common values sought by today’s global citizens in order to create a world of peace that allows for human rights, justice, freedom, and the protection of all core values of humanity. Therefore, the final purpose of the DPCW is not to remain as a declaration but to be submitted to the UN General Assembly as a draft resolution and to be adopted officially in order to become a legally binding instrument.

Overview of the 10 Articles and 38 Clauses of the Declaration of Peace and Cessation of War
Articles 1 through 7 explain about the role of a state in creating a peaceful global society by the reduction of violence, disarmament, respecting international law and promoting friendly relations. Articles 8 through 10 emphasize not only the freedom of religion, participation of ordinary citizens, and improved education and welfare, but also the participation of all societies and communities in the development of peace and the shared responsibility of creating a world of peace by all global citizens.

In summary, Articles 1 through 5 work to prevent all conflicts between states from occurring and Articles 6 and 7 offer detailed conflict solutions, whereas Articles 8 through 10 cover peaceful methods and practices that can be used to maintain the world of peace after it is established.

The DPCW covers basic human rights (freedom, justice, peace, security, solidarity, social progress, improvement of the quality of life and freedom of religion) that are stated in declarations and charters of the international society, including the UN Charter and the Universal Declaration of Human Rights, and asserts that all states are responsible for protecting these rights.

To protect the basic human rights stated before and to create and sustain a world of peace, the DPCW emphasizes the importance of the freedom of religion and spreading a culture of peace. Religion, which has greatly contributed to the development of civilization and the creation of today’s values, remains as a major source of conflict in some areas. There should never be any wars and conflicts caused by religion, and religion should not be abused by an individual or a particular organization for political or social authority. Therefore, when discussing the shared efforts of the global community for peace, religion cannot be left out of the conversation. Furthermore, the DPCW also proposes cooperation across the globe to guarantee the rights of society, including education, welfare, and freedom of the press. The DPCW reflects the basic human rights that have been guaranteed by international charters and declarations adopted by the UN General Assembly in the areas of political, civic, economic and cultural rights. 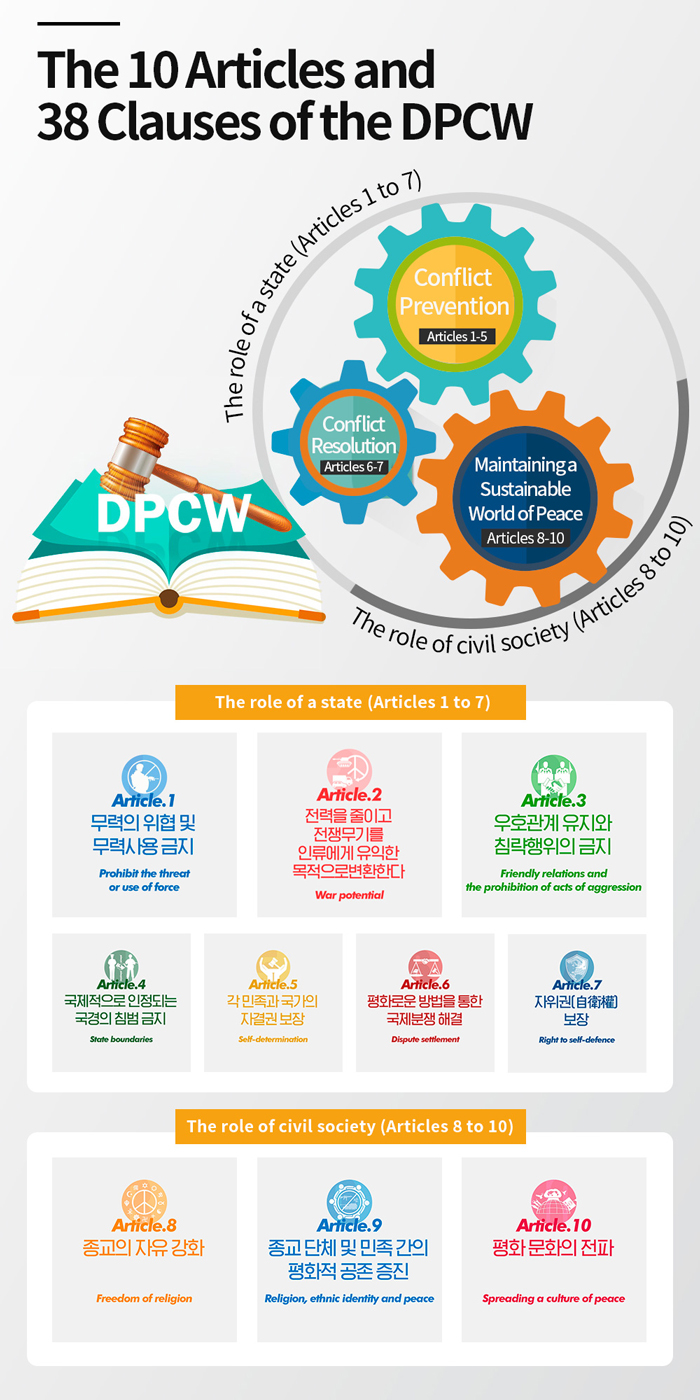 What Makes the Declaration of Peace and Cessation of War (DPCW) Different?

For this, the DPCW mentions that all states should be mindful of equal authority, and the power of law can replace war as a means to solve judicial problems and other conflicts. The DPCW aims to not only become a legally binding instrument through the adoption of the UN but it wishes to transform and expand the paradigm into a "fair rule of law" amidst the current order where rule of power triumphs and wars and conflicts are never ceasing.

The implementation of the DPCW may seem difficult, but it is possible because we are living at a time when global citizens can play a direct role in achieving peace in the world since more people are now able to influence international society. Therefore, if the women, youth and media lead the international civil society to urge for the DPCW and take part in monitoring its implementation, no state nor head of state will be able to act according to their own desires. If all citizens speak up with one voice for peace, states will have no choice but to follow through.

Therefore, it is crucial that all citizens participate in monitoring the effectiveness of the DPCW, which is why people are currently flocking to HWPL. This is also the reason why we call the DPCW the answer to peace, and are the key points that differentiate it from the current international laws.

Urging for an International Legal Instrument to Spread a Culture of Peace: Legislate Peace Campaign

Since the DPCW was proclaimed on 14 March 2016, people from all around the world, including government administrations, civil society organizations, religious followers, the media, youth, and women, are raising their voice for peace to implement these principles of peace worldwide. Since September 2016, over 100,000 people have participated in 630 events in 170 nations to urge for the DPCW under the Legislate Peace Campaign.

The Peace Letter Campaign that started with the youth of the International Peace Youth Group also expanded to include the participation of women and civil society actors. The Peace Letter Campaign, as part of the Legislate Peace Campaign, is a campaign that urges for the implementation of the DPCW through letters that are handwritten by ordinary citizens to their respective heads of state.

Some may think that the Peace Letter Campaign is just a bundle of letters, but if the citizens of each nation are able to deliver their heart for peace to all 193 heads of state then world peace will surely be established.