[HWPL Special Edition: The Beginning of Change towards Peace] 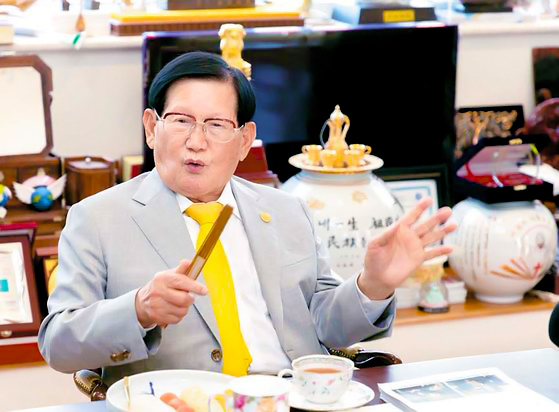 Chairman Man Hee Lee of HWPL has traveled around the world 30 times and visited more than 100 countries in the last seven years for cessation of war and world peace. [Photo: HWPL]

The DPCW is a document that was created after difficult deliberations by the International Law Peace Committee, comprised of leading experts in international law. The full official name of the Declaration is the Declaration of Peace and Cessation of War. The reason why the DPCW, proclaimed in March 2016 for the first time, has received much attention throughout the world as a new system of international law is because the DPCW fundamentally prevents war itself.

In the last seven years since May 2012, Chairman Man Hee Lee of HWPL has traveled around the world 30 times and visited more than 100 countries for cessation of war and world peace. As we celebrate the 3rd Commemoration of the DPCW, we asked him about his peace scenario at the HWPL Peace Institute in Gapyeong, Gyeonggi Province.

Q What is the significance of the peace work that you have done so far for cessation of war and world peace?
A. “More people died from starvation than from combat injuries during the Korean War. Many people struggled to live, eating anything from dirt to gunpowder in bullets. When could they ever take off their blood-stained military uniforms? To do so, war had to come to an end. Wars must never happen again. Peace is not just a matter of one individual or one country. It matters to all people of the world, so everyone in the world must support this work of peace. I invite everyone to become messengers of peace, transcending the borders of nationality, ethnicity and religion.”

Q. Why is the DPCW an answer to achieve world peace?
A. “The true meaning of religion is ‘highest teaching.’ It is the teaching of God, of heaven. All world religions must return to this original meaning of religion. They must not be the source of conflicts with one another, but instead must have the leadership to guide mankind towards peace. They will be able to discover the true meaning of religion by the work of comparing different religious scriptures. Also, HWPL will have the DPCW introduced in the UN General Assembly in September of this year and bring it to a vote. The DPCW, as a new system of international law, will be a legally binding instrument to realize world peace.”

Q. Could you comment on the Peace Letter Campaign that HWPL is engaging in together with many youth, women and social organizations around the world?
A. “If heads of state truly love their citizens and their countries, they will not be able to ignore the will of the people. Young people are sacrificed in the frontlines of war without getting a chance to blossom. Has anyone compensated for their sacrifices? Now the youths are saying they will protect themselves. Women are saying they will not send their children to battlefields. Their Peace Letters will certainly move the world.”

Q. What are your thoughts on the inter-Korean relations?
A. “There is no one in the entire Korean Peninsula who does not want a peaceful reunification. If that is the case, why does the Korean Peninsula still remain divided? It is because political leaders are opposing reunification. They need to lay down their power and authority. Is it the people who are blocking reunification? I believe that we must do something about this divided peninsula. We cannot just rest idle; we must do something to achieve peaceful reunification. We can achieve it if we let people move freely in between the two Korea’s and let them start working together. Since Korea has experienced much suffering and pain throughout history, such tragic history must now come to an end.”

Q. What could be a path forward for peace education?
A. “Someone once offered to award me a peace prize, but I rejected the offer. Instead of receiving the peace prize, I made a book that contains all the peace work that we have done so far and distributed the book in libraries around the world, so that the future generations can know about this work of peace. I believe that this is a true peace education that we need. No one has yet been able to achieve cessation of war and realize world peace, and this work may seem impossible even in the future. However, this is a work that needs to be done by someone for all mankind, and maybe the DPCW, which is about to be introduced in the UN General Assembly, could be the last hope we have.”